A tuba sat next to the wall – neglected by all appearances. The dust was thick on most surfaces, and anybody could tell what was used regularly by the lack of dust. A fairly-clean pair of glasses sat next to an extremely dusty old television set, and a barely-visible stack of envelopes sat next to a somewhat polished typewriter.

The furniture was that of a bachelor. A single armchair sat in the corner, next to a small round side-table. A few books, mostly classics, were piled on the table. The wood floor was spotted here and there with throw rugs of various shapes and smells. An ancient phonograph hummed from its stand, some vaguely familiar tune. A man sat in the chair, talking to an uninterested cat.

The man stood up and half-walked, half-stumbled over to the opposite wall, which, other than the man himself, was the most interesting aspect of the room. Dressed in some form of loose-fitting night clothes, he looked rather ridiculous as he shuffled across the living room floor. His hair was disheveled and his beard fluffed out like an upside-down afro. The cat twitched his tail and turned his head to follow his human. The cat glanced briefly at the wall as his human reached it, but cats really aren’t interested in most inanimate things that can’t be made to roll across the floor.

The wall was one of those impressive bookshelves that one might find in an old library or mansion. A ladder on rollers was fitted to the wall, and the man could reach any part of any shelf by merely rolling the ladder back and forth, which he often did just to amuse himself. The shelves, ladder, and contents of the shelves, I might add, were the cleanest things in the room. Not a trace of dust was to be found on any of them.

“Umm…. Let’s see here,” the man muttered and mumbled under his breath as he slid expertly on the ladder along the wall.

“con… con.. continent, California, caliphate, concentrate, congenial, oh.. wait… gee…” he slid back along the wall in the other direction.

He rummaged through the objects on the shelves as he went.

“Ah ha! Geniality! It was right on the tip of my tongue; I could picture it and hear it, but I couldn’t say it, Tabs.” The cat watched a fly buzz around the room. “Yes, it was a welcoming atmosphere, to be sure, but I….” his voice droned on as the fly came just a bit too close to Tabs.

The man placed the little carving of “geniality” back on the shelf. The words all quivered as he climbed back down the ladder. Tens of thousands of combinations of letters. They all sat proudly in their spots in his physical vocabulary.

“Anyway… huh… you don’t care, do you, Tabs?” He picked up his book and began to read. “Ooh… there’s a new one.” Setting his book back on the little table, he set to work whittling a few letters out a block of wood, and Tabs batted the wood shavings as they fell.

END_OF_DOCUMENT_TOKEN_TO_BE_REPLACED

An artist once built a park for the enjoyment of others. As he was a great lover of nature, he crafted the park in such a way that the benches and fountains and ornaments blended naturally into the wild theme. He made benches from great boulders, and his fountains resembled the streams that one may find in the Smokies or Appalachians. His touch left no detail undone. The paths through the park were paved with small stones, like a dry creek bed may boast. The edges even lent their aesthetics to those of a stream bank.

His work took him many years, and during that time many animals and people wandered through, amazed by the work, but unsure of its origin, for our artist worked in such secrecy that he avoided all human contact. Only the birds and smaller creatures saw his work, and though they often spoke of it, the tongues of men and birds do not easily mix.

One day, the artist found his work finished. His park was constructed and the piece was signed. His signature ran through the park like a birthmark, intertwined with the layout in such a way that none could argue the whole. 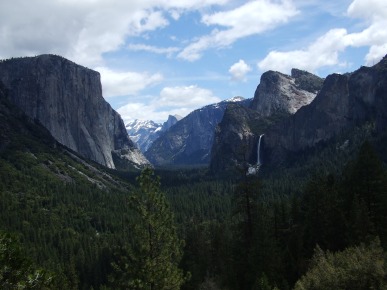 The residents of the surrounding town wandered often into the park, and they loved the artist through his work, though they did not know his name. The years passed, as years do, and the people gradually forgot the creation of the park. It became a seemingly timeless fixture. One day, a visitor came into the town, and a friend who was a local took him to the park.

“Look at our marvelous park!” exclaimed the local “We value and esteem this creation as our most treasured possession.”

“It is a beautiful place,” the visitor commented, “surely one of nature’s finest works.”

“But more than nature, my friend! This is the work of a man!”

“My good fellow, while your belief is truly quaint, I see no more than folly in your assertion. Take this large stone, for example. It has the same geological makeup as that boulder there, yet it resembles a bench. I suppose that you would say that a man carved this? For what? The pleasure of others? No, this was the work of the ice of prehistory. Look at the way the cuts are smoothed over, and the deep gashes in the sides. The force of water is greater than you might think. Look at the great canyons in the West, do you think those were the result of one man?”

The local looked, and though he thought the idea of chance was far-fetched, he saw the logic in his companion’s words. As much as the great rocks resembled benches, so might a fallen log, or some other luckily rolled boulder. He thought for a moment, before replying, “Ah, but you have forgotten the path upon which you now stand! Look at the detail with which these stones were laid! Look at how none jut up to impede our walk, and observe how clear of debris they remain!”

The visitor smiled, “Ah, but surely you don’t think that someone took the time to lay out these stones, just as perfectly as if they had lain in the bottom of a creek! Yes, a creek, for that is what I say these paths are. Nothing more.”

Perhaps these paths were no more than creek beds. The animals that wandered through these forests had their own paths, and these could have been formed by none other than the guests who came to admire them! Our local looked a fair bit more troubled as he reached for his last handhold. “The fountains! You cannot surely say that these are the work of nature! She may be powerful, but does she make such things of beauty for no reason?”

The visitor contemplated for a moment before replying, ” yes, I agree, the fountains are curious. I have, however, seen such a thing before. See how they sit on the side of a hill, and see how the brush cleverly hides the flow! It is no more than a ploy of gravity, my friend. These fountains are no more than tiny waterfalls and miniature rapids. You would see the same thing, if you looked, on a such a larger scale, in the mountains surrounding us!”

And so, in the mind of some, the signature of the artist was gradually obscured. His work was credited to chance, or nature, and the park itself became known as a great place to see wonderful natural fountains, paths, and beautiful natural ornaments. Every once in a while, though, if one were  to be quite still and to watch the park at night, he might observe a man come into the park and straiten the stones or pick up litter, and if the observer were even more vigilant, he might notice that the park itself never quite descended to a point of disarray, even though none of the locals kept it up.

The artist, though ignored, worked on his art.

The Portrait of an Apology

The sun is shining down behind them; their shadows stretch on and intermingle with the trees and mottled brick pathway. The birds are taking shelter in the trees and shrubs, for the wind is playing with everything it can find. Ducks are voicing their concern over the blustery day. The water in the fountain attempts to escape from the marble sculpture, but the stone angels continue their eternal task of pouring their never-emptying bowls and pitchers. The couple sitting on the wrought iron bench watch as nature and humanity perform their ever varying dance.

He is young. His hair drapes over his face like the roots of a bodyless plant. His glasses are square; they frame his eyes to form the impressions of two portraits of tiny universes. The thin, light grey jacket rests casually over the t-shirt inscribed with the name of some moderately well-known indie band. Flip-flops and a fairly nice analog watch complete the casual ensemble. His gaze is deep, and he is in the middle of some statement—obviously heartfelt.

She is listening, but her eyes are focused on something in the foreground of the scene before them. Her silky black hair has no resistance against the breath of the winds. Her sun dress and handmade hat fit well with her pale skin. Her handbag is sitting next to the bench, very assessable, but threatening to spill its contents if not adjusted. A note, waiting to be read, peeks from the flap.

The sky melds into the trees, and the clouds gradually form as a brush gently touches the paper. The artist looks at his work and debates between two frames that would variously complement different elements of the painting. The trees quiver slightly as the world is shaken by the scratch of a pen. The ducks watch as a signature is drawn in the grass. The couple continue their pose, frozen in time to be framed and admired. Thus is completed the portrait of an apology.

I started writing this a while back, and it sat on my hard drive. I’m thinking of working on some more fiction, but I’m not sure what direction I’m going to head. I like the worlds of Tolkien and Lewis, but that genre is far too crowded. Any ideas are quite welcome!